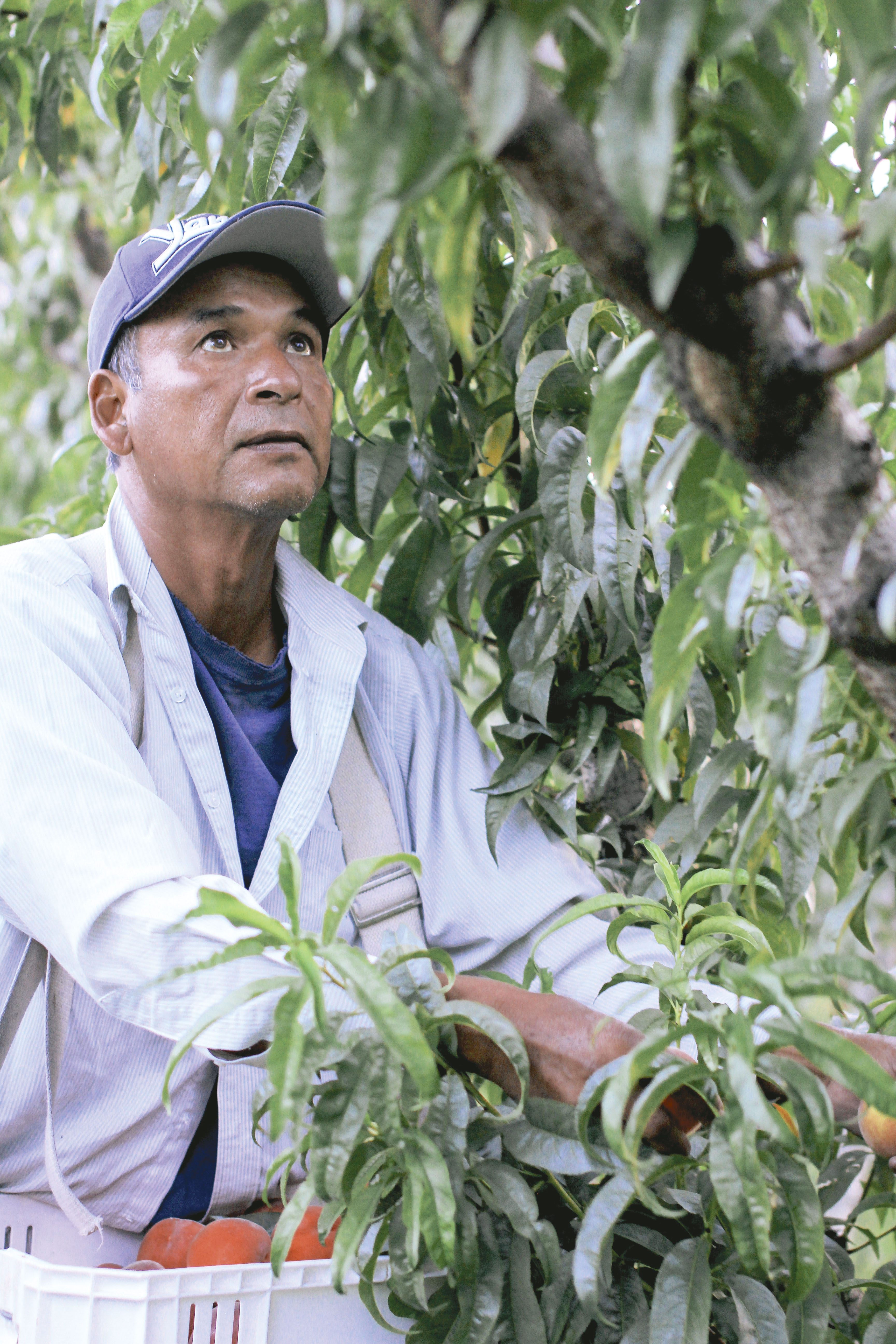 On a blue-sky August morning, there’s a tinge of fall in the air; the sun has emerged over the flat-topped mountain east of Palisade, casting warm sunlight over Thomas Cameron’s peach orchard. Migrant farm worker Adolfo Yebismea Jupa carefully places peaches in a plastic crate, called a “lug,” which he carries via a canvas harness draped across his shoulders.

The distinguished-looking, baseball-loving 46-year-old Mayo Indian is from a village in Sonora, Mexico, and spends a good part of each year working at the Palisade orchard. He wears a blue Yankees baseball cap, and a long-sleeved shirt that protects his arms from the intense itching caused when peach fuzz falls on the skin during harvesting. His black work boots glisten with moisture from walking across the irrigated rows.

He and the other half-dozen peach pickers carry ladders from tree to tree, climbing up and down, touching the fruit for ripeness, plucking only the peaches that are ready. There’s an organized randomness to the harvesting. Cameron says he gave up trying to orchestrate where and how they pick. “The workers communicate between themselves,” he says. “They know what needs to be done.”
Jupa showed up at Cameron’s Rancho Durazno (Spanish for “peach farm”) a decade ago, after walking across the Arizona desert for 10 days, during which he ran out of water. He risked the journey for the chance to make significantly more money than the $10-$15 per day he earned fishing off Mexico’s gulf coast. Fishing used to be good, says Jupa, speaking in Spanish. “But now, there’s lots of competition; there are big factory ships.”

An organic fruit grower for 35 years, Cameron appreciated Jupa’s “cheerfulness and his readiness to jump in anytime of the day.” That’s why, at the end of that first season, he drove Jupa safely back to Mexico to reduce his risk of being apprehended, deported and banned from reentering the United States. “We talked about getting the H2A visa on the drive back,” says Cameron. “When I took him home, I realized how important he was to his village. For our business to be dependent on people taking that kind of risk is kind of unconscionable.”

Cameron completed the paperwork and costly process that would allow him to hire H2A visa temporary farm workers the next year. Back in Mexico, Jupa traveled to the city of Monterrey to apply for the work visa, and pay his own associated fees so he could legally work in the United States. He leaves by bus each February, making the 36-hour journey with three dozen other men bound for higher wages. In November, Jupa returns to Mexico, where grandmothers, cousins, nephews and nieces gather with his immediate family for a large welcome-home party.

At Rancho Durazno, Jupa plants, prunes, weeds, and thins blossoms from the trees. During harvest time, he’s in the fields from 6:30 am to 4:30 pm picking – at various times – peaches, apricots, sweet cherries, nectarines, and plums. “I really like working, it is beautiful work to get good fresh fruit to people,” Jupa says. “It’s also rewarding to be able to help and support my family.”

In July, the trailer Jupa lives in on the edge of the orchard is full of family visiting from Mexico. His wife, Asteria, daughters Reina and Marina, son-in-law Luis and a toddler grandson all gather in the living room and kitchen area. Since Jupa’s oldest daughter finished college and became a teacher, their “professional status” has allowed the entire family to obtain tourist visas, allowing them a two-week visit for the last couple of summers.

“It was hard with his absence, solving problems, health issues; he wasn’t there to talk to,” says his wife. “The first time he came to the United States, he had to walk and I was afraid.”

Marina mentions missed graduations and other family events as her father listens, his eyes slightly downcast. But it was for “something better” she adds. Adolfo smiles.