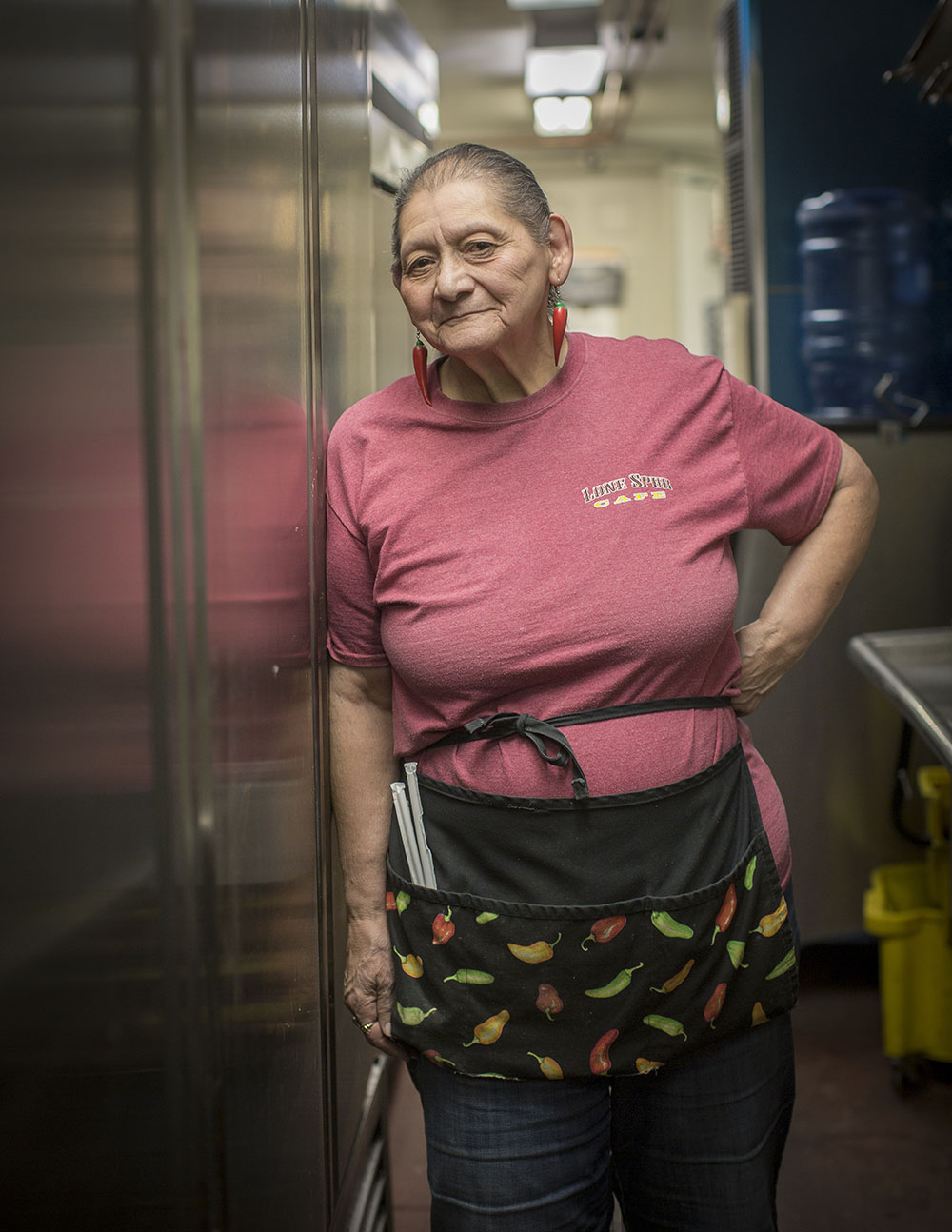 The Sunday breakfast shift is at full roar. Every table is jammed with patrons in states ranging from jittery hunger to postprandial carb stupor. Four parties await seating in a sliver of a waiting area. The kitchen is banging out supersize meals designed for bygone days of men working cattle. Inveterate hostess, Mama Bea, calmly stitches her way through the narrow restaurant passageways like a deft needle, hands occupied with the tools of her trade.

Mama Bea likely woke up excited, wondering which familiar faces she’d see at Durango’s Lone Spur Cafe today: “It’s just so good to see everyone. They keep coming back.” With dangling red-hot chili pepper earrings, supportive shoes, and a trim, salt and pepper, no-nonsense hairstyle, she patrols the restaurant with a pot of coffee looking for folks in need. “You done here, darlin’?” She asks a woman whose plate is empty, save for a neglected pile of hash browns. Mama Bea whisks up the plate and tells the customer, “Now you can relax with this outta your way.” She means it.

Mama Bea, waitress for 45 years, and now hostessing (because, “I can’t fucking walk anymore. But I can tell ya a joke, darlin’”), takes her job seriously. “People need to relax, get away from all the turmoil.” If she can offer a small refuge from life’s pressures in the form of forever refills and vigilant service, this is more than enough for her. “You gotta take good care of people; let them know they’re special,” she says as if this is universal human credo. She’s a pithy business tagline come true, or maybe the spokesperson of every spiritual tradition: In giving we receive.

Bea Williams began waitressing in Pagosa Springs as a teenager, netting 75 cents an hour. As a single mother to her second daughter (Her first daughter is 53 and her second 34. You do the math.), she moved to Durango and began waitressing evenings at Francisco’s Restaurante Y Cantina while her sister babysat. Days, Bea worked in the Park Elementary lunchroom so she could see her daughter. At Francisco’s, she developed a following who appreciated her hospitality, jokes, and reliability. Even tourists sought her out on their annual trips to the Southwest. She waitressed at Francisco’s for 31 years until the restaurant closed in 2014.

In 2016, the Lone Spur Cafe took over the iconic Francisco’s building on Main Avenue and the manager, Scott Finzer, came looking for the equally iconic Mama Bea. “He took a picture of me and put it on Facebook—is that what it’s called?” Mama Bea shrugs, “It said: Mama Bea is back.”

Indeed. Like a bird overhead, Mama Bea takes in her vast surroundings in a single frame. The coffee is returned to its warmer and she’s marching with place settings toward a newly-emptied table out of view. How’d she know that table was vacated? “I saw Diane walking away with cleared plates,” she explains. It seems algebraic, somehow. If Diane is walking at four miles per hour with six empty dishes, how many tables have just opened up and where? Meanwhile, three more tables vacate. Mama Bea rushes them with her wet rag, totes menus under her arm, takes extra time to scrub some spilled syrup (“Get it outta there, ‘darlin’”), arranges place settings, and consults the waitlist. Is she stressed? “Nope. I just keep runnin,’ darling’, I just keep runnin’.” She calls out, “Emily, party of two.” Emily and her breakfast mate rise. “Follow me,” Mama Bea instructs, “Follow your Mama.”

She’s back with the coffee pot, singing her Sunday morning refrain, “Dribble, dribble, dribble” as she pours. Most people smile at her, a few squint bewilderedly, wondering perhaps, ‘Who is this woman and why is she enjoying her job so much?’

“How nasty do you want it?” Mama Bea returns.

“You know why women don’t want to go to heaven?”

She allows a short pause for suspense.

“Because there’s only one peter up there and he’s a saint.”

Mama Bea pauses for a nanosecond to enjoy the laughter, then is off to perform triage on a recently relinquished 4-top.

Mama Bea puzzles together a table’s worth of of empty dishes into a towering stack, which she carries into the full-tilt kitchen, shouting, “Coming in!” A dishwasher materializes, grabs the ceramic tower from her in what seems to be a moment of compassion, but could just be protocol. “Thanks, Mama,” he says, a phrase you hear ringing out throughout the restaurant frequently during her shift. Not to invent sentimentality, but this restaurant crew appears to work together with a sense of care and collaboration that is reminiscent of a family, except probably harder to find in any gathering of actual relatives.

According to the Bureau of Labor Statistics, Americans currently stay in their jobs for an average of 4.2 years. It seems we’re not the most settled of people, always looking towards the horizon for what new opportunity might be dawning. Did Mama Bea ever say to herself in her 45 years on the restaurant floor, I’ve had enough of this? “No. Never,” she says with certainty. While change roiled in Durango, trailer parks swapped for condos, Mama Bea was likely triangulating between home, Francisco’s, and her daughter’s activities with full conviction of her purpose.

In the midst of the Sunday breakfast circus, a server named Mike discloses that Mama Bea is like Durango royalty: “She knows everyone, she’s like a celebrity.” Usually, royalty is a title bestowed on local philanthropists, politicians, innovators, and job-makers who perhaps affect the course of history. And yet, in a town like Durango, which partially runs on the fuel of tourism, perhaps it’s the many service workers who deserve gratitude and recognition for keeping the machine of hospitality humming along, dropping dollars into our tax base.

Mama Bea’s back on her rounds as caffeine first responder. “Hey, who let you guys in here?” she calls out to some just-seated folks who greet her like family. She tops off a man’s cup and says, “How’re you today? Ornery, I hope.” Someone compliments her on her hot chili pepper earrings and she nods. “I’m a hot Mama,” says this woman who’s old enough to be someone’s grandmother. A young couple—colorful, loaded omelets in front of them—ask for a joke. “Have you heard how sex is like snow?”* Mama Bea begins, her audience rapt with anticipation. It seems this job could include less banter, less joke-telling, and maybe the preservation of energy for a woman who’s been on her feet for 45 years (she hasn’t heard of a Fitbit, but figures she walks several miles a shift). These connecting exchanges are what it’s about for her. “I really enjoy people. They keep me going.”

She pauses, perhaps flipping through the rolodex of her own memories. “I’ve had a wonderful, wonderful life. I’ve worked hard, but it’s all worth it.” That’s about as much nostalgia as she can afford today. A table has opened up and Mama Bea leads a couple to their refuge for the next 45 minutes. Two hours in and her morning shift has already contained miles of faces, gallons of coffee, and at least three jokes rated medium-nasty. When she returns to the couple bearing place settings she says, “Thank you for being patient. Didn’t want you eating with your fingers, darlin’.”

* To find out the answer to, “How is sex like snow?” go down to the Lone Spur Cafe for the Saturday or Sunday breakfast shift, or check this story online at ediblesouthwestcolorado.com.