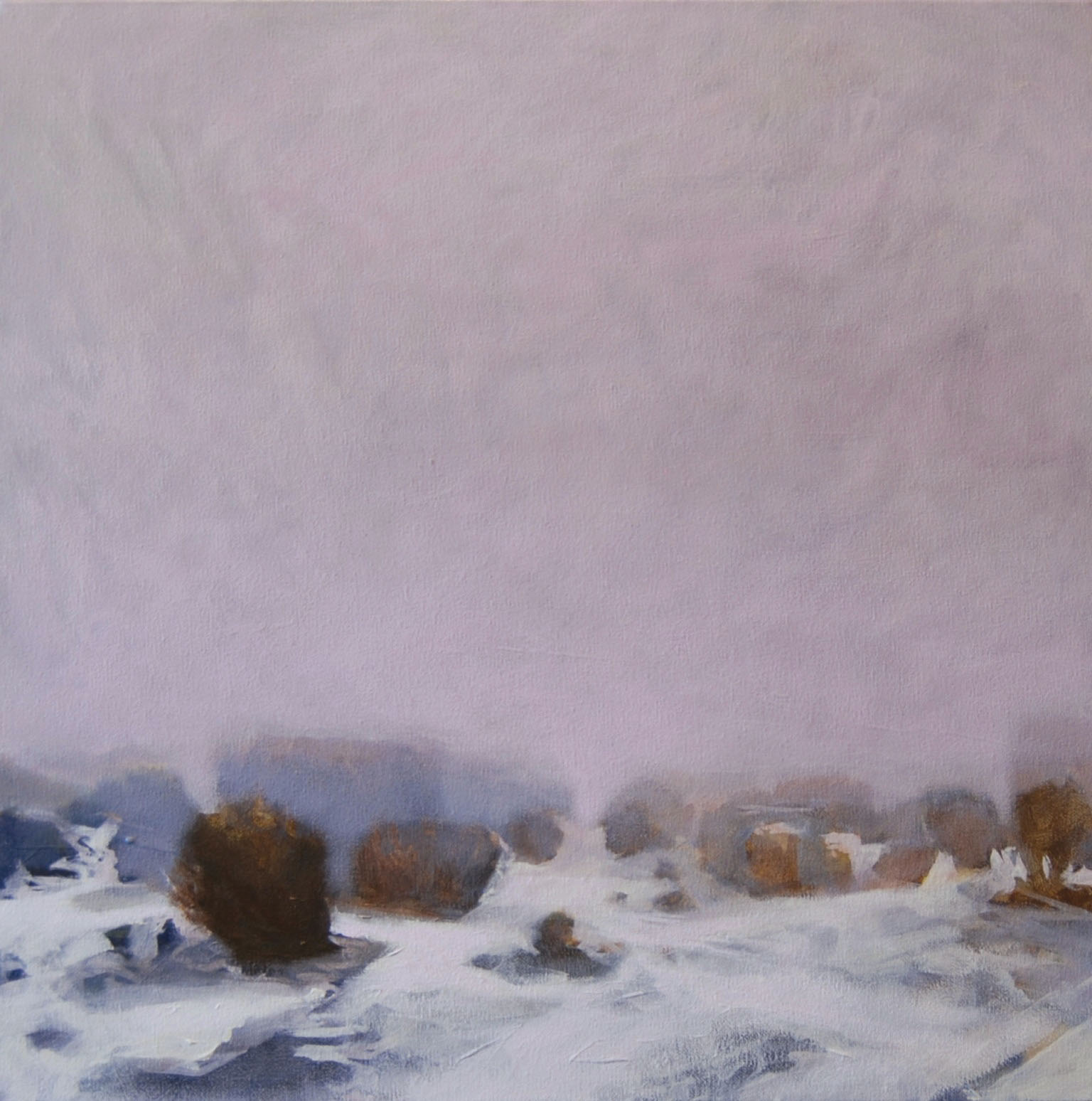 Why We Camp in the Winter in the Desert

The photograph, taken 26 years ago, is faded and worn. In it, Dave, Craig and I stand in a sandstone cul-de-sac facing each other in the relaxed but anticipatory pose of hacky sackers, of 20-year-olds, just waiting for life to unfurl before them.

We were nearing the end of a four-day, mid-December backpacking trip in a sinuous Cedar Mesa canyon in Utah. For three days, we froze our asses off. Then the weather had warmed enough to allow us to strip to shirt-sleeves and kick some hack — a moment worthy of capturing on film, despite the cost.

The eerie warmth and gauzy clouds overhead should have warned us that a storm was brewing. And when, in the afternoon, the gray thickened overhead like churning cream, we probably should have packed up, hiked the few miles back to Craig’s Trooper, and driven the eight miles up the Hole-in-the-Rock trail to the relative safety of pavement. But you don’t quit a winter desert camping trip before it’s time, because if you do, the reward at the bitter end — your warm bed, a cold beer, a greasy pizza from Wagon Wheel in Monticello — isn’t nearly so sweet.

I got initiated into winter desert camping when my dad took me to the mouth of Arch Canyon in January when I was a grubby-faced, snot-nosed seven-year-old. I watched Comb Ridge glow that afternoon, and I cried, not because of the sublime and muted light, but because my corduroy pants and floppy moon boots from TG&Y were sopping wet from tromping around in half a foot of snow and I knew that my sleeping bag would provide little comfort against the cold. These days, that might be considered child abuse. But my dad exonerated himself by cooking Dinty Moore stew piled atop crispy chow mein noodles from a can. The heat of the metal bowl warmed my hands even through my mittens and dried out my freezing tears.

Winter desert camping is like that, a strange amalgamation of beauty and dread, of suffering and of sweet and precious succor.

I once mustered up all the strength in my then-16-year-old body to wade across an ice-choked Escalante River, in jeans, with a full pack, knowing that on the other side my dad’s campfire biscuits — he never cooked on a campstove — awaited. He’d fill a skillet with squeeze Parkay — this was back when butter was considered evil — get it hot and bubbly over the fire, then plop in those Pillsbury biscuits from a can. I can still remember the bliss of sitting on the cold dirt, clenched against the chill, my teeth sinking into that hot, crispy, greasy, doughy concoction.

Craig, Dave and I partook in our own winter camping ritual that day at Cedar Mesa, all with one objective, sleeping through the long, cold night. We ate Wheatena, the hippie Cream of Wheat, for breakfast. We hiked ruthlessly, watching closely not just for arrowheads, but for a more valuable treasure: the perfect south-facing, sun-washed hollow in sandstone, stroked smooth by wind and water, where one could lie and absorb the warmth. And for dinner we had pasta drowning in butter and cheese, in order to pay homage to the culinary holy trinity of desert camping: complex carbohydrates (sleep aid), hot water (for warming one from the inside) and fat (because, well, fat).

Back then, we eschewed tents out of some misguided sense of masochistic purity. Why camp if you can’t gaze at the stars from some hypothermic haze? And because suffering through the night made the first sunbeams of the dawn that much more rewarding. So, instead, we each found our own overhanging nook in which to cram ourselves, and drifted into sleep.

I dreamed: I was in the grocery store, hopelessly looking for something to warm my cold feet. After an hour or so of wandering the aisles, I snapped awake, only to find that my feet were still freezing, the bottom half of my sleeping bag saturated with ice water. Trying to comprehend, I glared out into the stew of darkness around me, and soon witnessed a headlamp’s beam illuminate great big snowflakes tumbling from the sky. Someone let out a sort of wail, half coyote, half cat in heat.

We gathered up what we could from our camp, now buried under eight inches of snow, and cooked up a few packs of ramen in an alcove, slurping the MSG-tinged broth as we waited for the light to come. This was the last of our food, save for half a box of Wheatena and a pack of sugar-free chewing gum.

The first wave of snow had melted upon hitting the warm sandstone, then frozen into a thin sheet of ice. So the climb out of the canyon, loaded down with packs full of wet stuff, was a groping, grappling, treacherous affair. When we got to the top, I set out across what looked like a snow-covered plain of sandstone. Easy enough. But with my third step, the earth tilted away from me, putting me face first into the snow. The sandstone was actually rippled with undulations, rendered invisible by snow and light. We were reduced to crawling like drunkards.

After three hours of walking, we saw the slice of red — the Trooper. But our trials were just beginning. Within the first 15 minutes of driving, we got stuck, and had to cut sagebrush to throw under the tires. The Trooper’s bumper acted like a plow, piling up snow in front of the radiator grill causing the car to chug to a halt, so that we had to get out and push. It was almost a relief when the thing finally careened immovably into a ditch. We threw a sleeping bag, a stove and the Wheatena into a pack and started trudging through thigh-deep snow on foot.

Craig forged ahead while Dave and I took turns with the pack, which kept getting heavier as it got wetter. We stopped occasionally to pour some Wheatena onto our tongues, then tried to mitigate the dirt-flavored mouth muck with a handful of snow and a stick of gum. It didn’t work. The snow stopped at about the time the waxy-blob sun dipped behind the western horizon. Then the clouds skittered eastward, the temperature plummeted, our sweaty clothes crackled as they froze, my cheeks ached with cold.

Some ten hours after we had last eaten any real food, Dave and I saw Craig’s jerky silhouette, barely visible in the dying light, veer suddenly to the right. He had reached the highway that slices across Cedar Mesa. And yet, for the first time that day I was actually worried. The chances of anyone driving on that road, which goes nowhere, on a night like that, were almost nil. We could be walking all night. We could join the legions of young “Durangotangs” who “died doing what they loved.”

We staggered down the middle of the single plowed lane of ice-glazed asphalt, desperately muttering a litany of greasy foods we craved like an incantation — Griego’s Frito Pie! Green Chile Cheeseburger! With Bacon! When our shadows sprawled out before us in a pool of yellow light, we didn’t know what to make of it. Headlights? It was a BLM ranger that my dad had called during the storm, asking him to keep an eye out for three dumb-asses on Cedar Mesa. We celebrated by taking turns putting our faces up to the truck’s heater vents.

The folks behind the desk at the Blanding Hotel where the ranger dropped us gave us a mean look when we walked in. We probably looked like Hayduke-loving wilderness terrorists bent on corrupting San Juan County’s youth with hacky sacks. But after Dave, nearly sobbing, told them what had happened, their compassion bubbled up. They gave us a warm room and served us mushy enchiladas smothered in a red sauce that tasted about how the town’s name sounds. They were the best damned thing I’ve ever eaten.

This is why we camp in the desert in the winter.