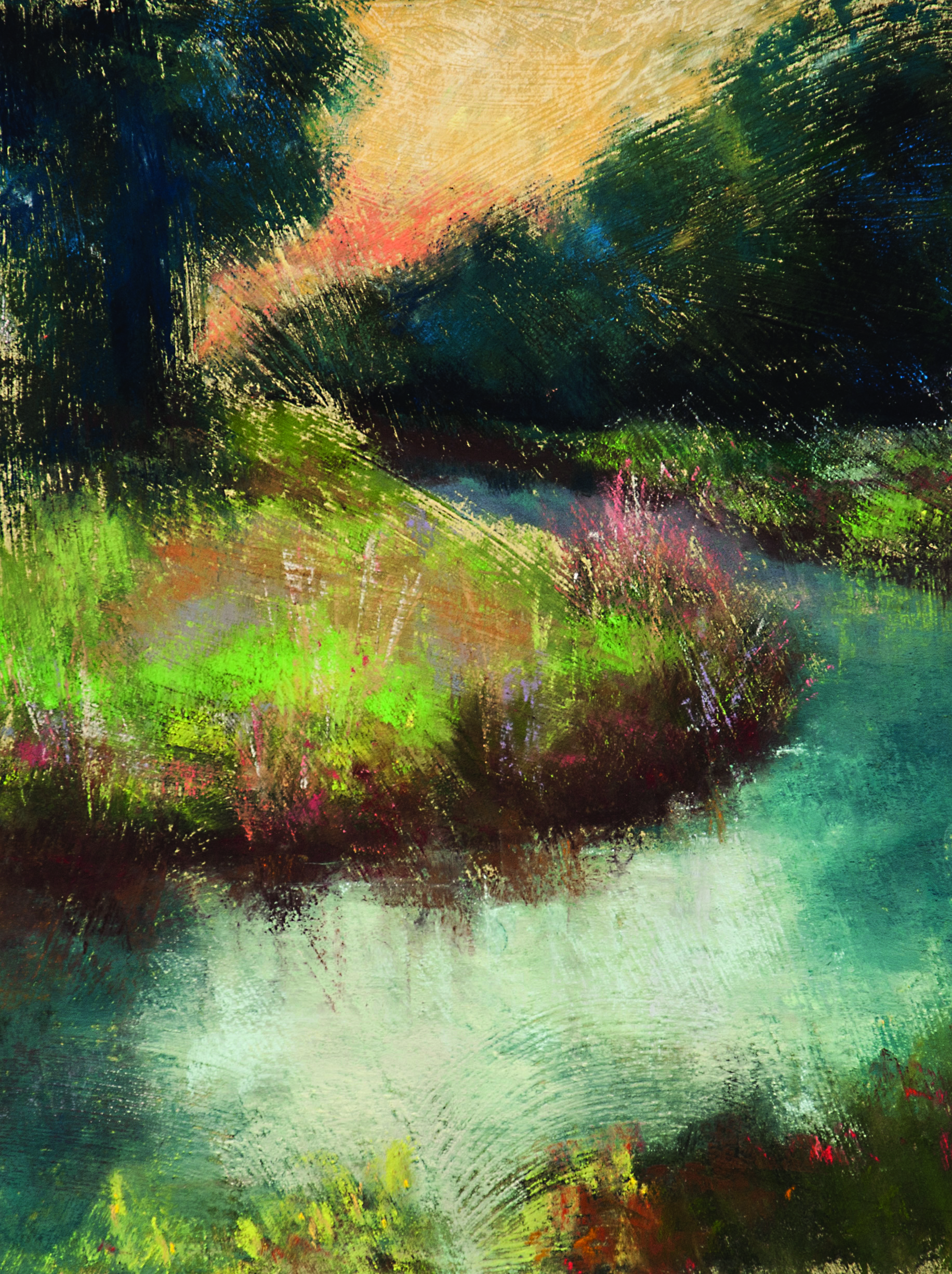 She Drove Us to the River of Sorrows

“He saw that the water continually flowed and flowed yet it was always there. It was the same and yet every moment it was new.”

I sit legs dangled over water-worn boulders in the middle of the Dolores River. It’s October, warm enough on the border of Colorado and Utah to recline in the sun. My daughter and husband are beached on stone slabs. Moments ago, I witnessed them swimming a swift stretch of cold rapids. I winced as Scott almost scraped his jaw on a rock. Though both of them are natural athletes, they still surprise me with their daring.

I glance at the cut on my wrist. It’s a noticeable pink line, not as pale as my older scar. It’s new enough to flare ugly crimson when my blood pumps in alarm. A few weeks ago, in a panic, I reached for the thin cord of our retractable dog leash to steer Hugo out of traffic. With cyclone speed the cord burned through layers of my skin. It’s now a laceration true as a mood ring. I consider it a token of all I can’t control.

While Hugo keeps a close watch near the shore, I take photos. Shallows team with tadpole eggs awash in neon moss. Minnows shadow the waters as our dog angles for a better view; father and daughter on their backs like sea lions. She looks like an adult stretched out beside him. As I breathe in, it feels like the forever of borrowed time. We could almost grow bored here in the lull of the afternoon. It’s funny how the launch of contentment itches at first like any wound in the fitful seconds before it begins to heal.

We stop mid-way for tiny cartons of cherry ice cream. I’m giddy my fifteen-year-old driver allows me feed her while she keeps her hands at ten and two. At her age, I was intimately acquainted with highways too narrow and winding to hold my speed. My body is shot through with a gallery of lash and road rash, lessons in caution etched not just on the surface but deep in muscle and flinch.

Once we pass the manicured lawns of Gateway resort, I’m eager to camp anywhere, so long as it’s just us, alone among the fiery wild privet and blazing elms. Earlier this year, after a brief flirt with reckless abandon, Sophia set her compass back to her own true north. In an effort to realign priorities, Scott and I lessened social media, swore off booze in solidarity, and clung to anything that might rebuild trust. I began a mantra I knew I’d continually forget and remember: Holding on, letting go — life’s unavoidable, inevitable surrender.

At the dirt road, Scott scouts for the optimal camp spot. Back when Sophia was a toddler, when playing with frogs in a riverside hammock was her greatest joy, we set out with another family in this same area. Now, as we look for a place for our tent, I have in mind the place we used to camp. Scott remembers wandering much further down the canyon, a place where he and a friend stumbled on a flat swath of land they deemed Shangri-La. I grow frustrated as the clock spins. Desperate for us to bike ride before it gets too dark, I have no patience for hold on, let go. I want to be there already.

Miles later we roll into our site. I want to rally, but I’m grumpy and irritated by the delay. It’s the golden hour before dusk. Bright yellow rabbitbrush radiates against deep blue skies. The sun burns low on brick-colored cliffs, green leaves and ocher sparkle on cottonwoods. The air is sweet with the candy-apple scent of leaves curling in on themselves, grasses curing to straw. As I inhale the sugar-spent toast of autumn, I begin to come around.

The spell that actually breaks my mood comes during our bike ride. After we finish inspecting the riverbank, Scott and Sophia push off again as I stay back on my bike, balanced on a rise of granite. My shutter clicks again and again as I try to capture sun lighting the tips of the coyote willow. When I’m ready to go, my shoe tangles in the pedal. I topple and collapse into a spiny mess of greasewood and assorted brush.

My family hears me shriek. They run back to see me tethered to my bike, helplessly impaled, shaking silently with laughter. Sophia frees my foot while Scott hoists me out with two hands. Limp with hysterics, “Holy Moses,” I say, freeing a thorny branch from my crack. “I knew tamarisk was invasive, but JEEZE!”

We make dinner by the light of our headlamps. Sophia, our conscientious vegetarian, cuts careful slices of wild mushroom for her spinach and pappardelle while I mix Moroccan spices for lamb burgers. When she finishes her pasta with chopped walnuts and fresh ricotta, we joke about “roughing it.” I dress our fire-roasted root vegetables and frisée, sprinkle in almonds, mince preserved lemon, and grin at my offering.

Bitter and sweet for dessert: dark, salted chocolate and coffee warmed over the fire. We regale Sophia with tales of how rash we once were, slightly older than she is now, when we struck out on our own. Though none of us remember the opening verse, we sing “Bohemian Rhapsody” while we wait to glimpse the moon’s face through a cloak of woody smoke. This partially-visible moon ascends behind the cliffs at our back and slowly illuminates the canyon wall. What had only moments before stood in inky silhouette is now platinum-kissed by the glow of a waning rise.

Under the silvered landscape we sleep in one tent. My mantra feels less like a fairytale and more like a lullaby. I can feel a shift, a quiet trust. My girl burrowed deep in downy comfort, Scott with a small dog at his feet — Hugo, the chimera, a tired bear cub, a resting dragon, a furnace in Scott’s sleeping bag.

As if unlocked in her dreams, Sophia wakes with the forgotten song lyrics on her tongue. We laze around after eggs and tortillas, then set off for an afternoon hike. We chatter about gap years and college abroad, stop short when we spy what looks to be prehistoric footprints in the mud. Clearly a triceratops, we agree, definitely not wild turkey. We hike socks off, traipsing through tributary. We imagine the Old West, enemies on our tail. If  we had to hide our tracks, this river could save us, outlaws, six shooters drawn, trigger fingers prickly with twitch. Us against the world.

This branch of cool water feeds the Dolores, teaches me how to cut through old pain, trace a source, and let its quiet murmur dissolve embedded grief. Single file, we lose ourselves in thought. Then we hear a splash. We look back to see our girl, ponytail swinging, suddenly sprung upright, watermarked by a plunge. “I didn’t trip,” she says, gathering herself. “Nope. Moving along!” We continue our streambed hike, laughing, smiling, together.

Once there was a time I’d thought our daughter would never want to separate, days when we’d ask her, “So where do you want to live when you grow up?”

“With you guys,” she’d shrug, answering as if we’d never have to let go.

Sorrrow and joy ride shotgun down the road of adulthood. I left home at seventeen in my boyfriend’s motorcycle jacket, drove my mother mad with worry. However, Sophia is not me. Her path is carved with more clarity than this river.

Campouts like these are how we hold on when we are most afraid. We tussle and risk. We fall sometimes, but reach for a hand. The barrage of technology, fear and toxic numb, allow us to forget who we are underneath. We have to dig, scratch the surface, and scrape the skin to reveal ourselves raw and vulnerable, believe trust is taking a deep breath and letting it out until it becomes less forced, recurrent and calm. They say water is stronger than rock. Love is stronger than force; it can override all the bumps, all the hard places.

Sunday night Sophia drives us home, all of us a bit transformed. Not even the landscape is how we left it. I can see the wind has stripped the dogwood, its red branches are altered; perfectly bright gashes outlined in fresh snow. 6

Kierstin Bridger is a Colorado writer who divides her time between Ridgway and Telluride. She is author of the 2017 Women Writing The West’s WILLA Award for her book Demimonde (Lithic Press 2016). Her full collection is called All Ember (Urban Farmhouse Press).