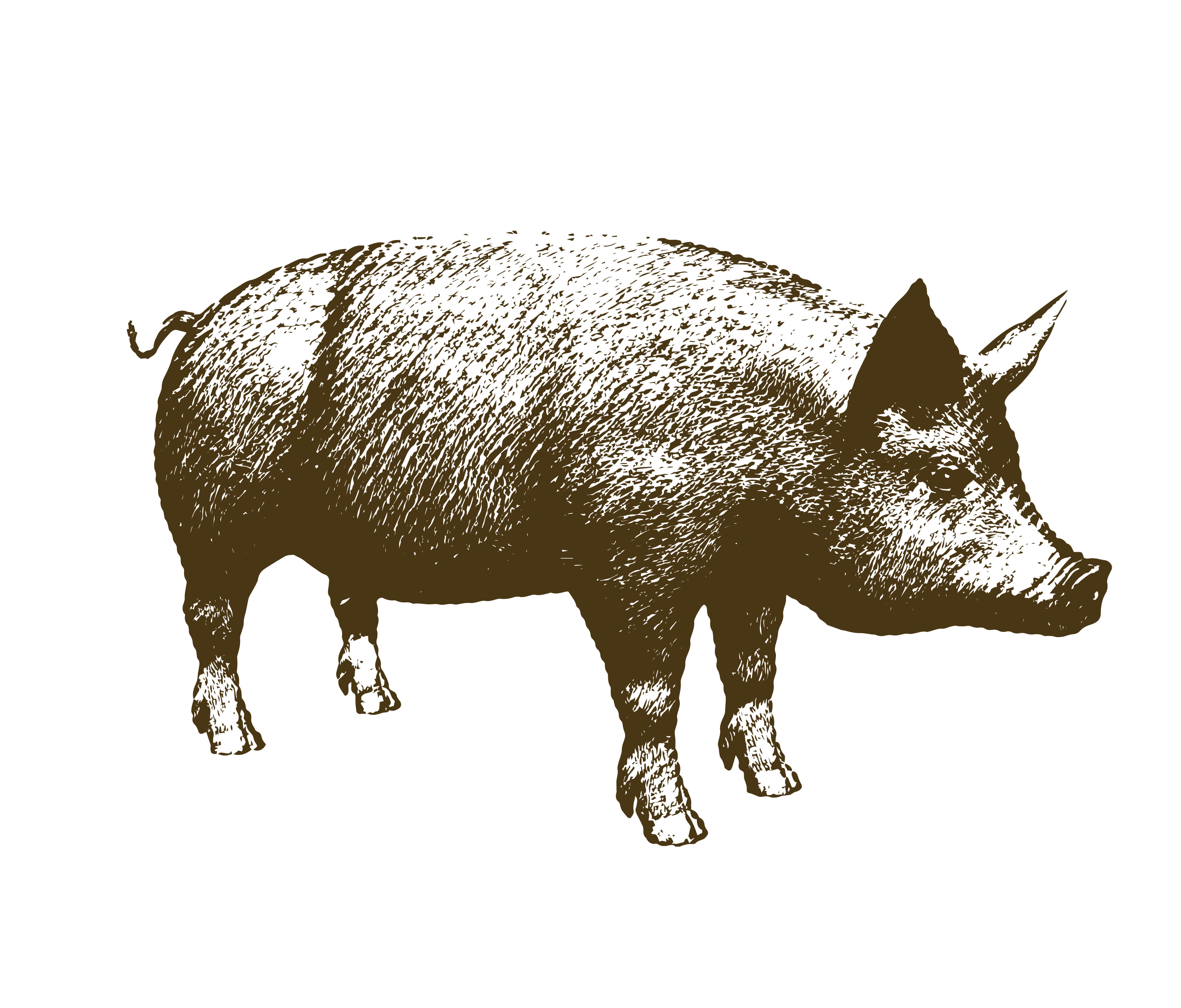 Of Pigs and Dragons

The village of Baoshan in northwestern Yunnan province had the cleanest outhouse I’d seen in all of China – not a single maggot, not a speck of filth. Moreover, Baoshan must have had a higher ratio of pigs to people than any other village in the Middle Kingdom.

The two phenomena were directly related, as I learned when I made my way to the communal open-air outhouse the morning after we arrived. I had to herd a whole family of fat, breakfasting pigs out of my stall before I could get down to business.

We had arrived hot, dusty, and homeless the afternoon before – a vagabonding Frenchman and I after a two-day, 35-kilometer trek through the Jade Dragon Snow Mountain, then down, down, down into the Jinsha River Valley, through small villages inhabited by the Naxi minority who people those parts of China. We had no map, so we asked directions from goat herders and troops of tiny, laughing women bent under bundles of firewood.

Baoshan clung like a barnacle to a spit of gray rock jutting out from the valley slope. Local folklore maintained this rock formation was a dragon slain by the gods. The village was then constructed upon the petrified monster’s head and neck.

Laden with backpacks, we approached the village gate, where a congregation of pigs, sparkly-eyed children, and pipe-smoking octogenarians basked in the afternoon sunshine, eyeing us curiously.

Since the only Naxi I knew was “Oh-la-la-lay, dao a-kun dao-pay,” which means, “Hello, I can see chicken feet up your ass,” (I had learned this during a raucous New Year’s Eve celebration a couple weeks before) I tried Chinese instead.

Much to our surprise, a young, spare man in loose trousers with a shaggy haircut stepped forward from this assemblage and said in clear, careful English, “Hello, I’m Mr. Mo. Can I help you?”

The Frenchie and I both sighed with relief. We had not dared hope to find an English speaker in such a remote place.

“Do you know of a place where we can stay tonight?” I asked.

“Yes,” said Mr. Mo, “but I’m very busy. So please follow me.” He led us through the arched stone gate and inside a courtyard cluttered with chunks of rock, piles of logs, and foraging chickens. Pumpkins were scattered across the tiled roof of the main house.

“This is my house,” Mr. Mo smiled modestly. “You can stay here. But I’m very busy. Preparing. New building.” This last word he pronounced like “beauty” as he motioned to the cluttered mess around us.

“When tourists come here, sometimes I guide. Because I speak English.” He paused between each phrase, as if collecting the needed words in his mouth and carefully, gently shaping them before letting them out. “But now, very busy. Prepare. For celebration. For new beauty,” he repeated.

We traipsed through the clutter, nodding hello to an elderly man squatting on one of the logs, beaming a gentle, toothless grin (“My father,” said Mr. Mo), and a lively-eyed old woman wearing a traditional Naxi head-wrap and jade hoop earrings, who was scooping a pan of water from a stone well in the courtyard. (“My mother,” Mr. Mo explained).

At last we arrived at a small, dusty room at the far end of the family complex. It was sparsely furnished, with removable wooden slats instead of windowpanes, and a view over neighbors’ rooftops and courtyards. From the rafters hung shanks of dried pork as big as punching bags, and the walls were papered with pages torn from an old high school English workbook. Chickens wandered in and out, pecking among the floorboards for lost sunflower seeds – the ubiquitous Chinese snack. Pigs snorted underneath us.

I tried to negotiate a price for our stay, but Mr. Mo just shrugged. “Tomorrow, we prepare for new beauty,” he said. “Then next day, house-raising. Celebration. Need many friends. To help.”

We told Mr. Mo we would be happy to help out in any way we could. He smiled his acceptance.

After a snack of baba (Naxi fried bread), la-zi (chili sauce), and homegrown peanuts in the shell, Mr. Mo took us on a tour of the village. As it was built on a knob of rock, the “streets” were not much more than footholds and passageways hewn out of the cliff, with houses crowded in all around. One had to take care not to plant one’s foot in a pile of pig droppings or a snoozing sow.

We climbed upon the village wall and surveyed our surroundings. High above were the forested flanks of the Jade Dragon Snow Mountain, which gradually gave way to arid gray sun-baked ledges lined with cactus and sagebrush, then lush irrigated terraces where the villagers farmed rice, chilies, and vegetables, and finally, the milky-mint ribbon of the Jinsha River slicing through the valley floor far below.

It dawned on us that every log and rock for Mr. Mo’s new house must have been dragged or carried several kilometers down the same steep, narrow trail which we had traveled. No wonder he was very busy, and no wonder he was so excited for the house-raising, to finally take place in only two days’ time.

That evening, we crowded with Mr. Mo and his family around a small, low table in the courtyard where the new house would soon stand, and ate dinner in the twilight: boiled potatoes, tofu, bean noodles that slipped off the chopsticks, steamed bread, and peanuts. A younger brother stood by to replenish bowls of rice, cups of moonshine.

The following afternoon, we returned from a rambling reconnaissance of the surrounding villages and countryside to find that the timber strewn about the courtyard had been transformed into framework puzzle-pieces neatly stacked on the ground, waiting to be raised the next morning.

Relatives and friends of the family worked into the night over sawhorses and chisels, putting the finishing touches on the preparations. Mr. Mo himself disappeared to make the rounds of the village, mustering all the human power he could for the following day’s exertions. We joined Mr. Mo’s mother and aunties in the kitchen, where as unskilled laborers, we were assigned a large bowl of peanuts to shell for the celebration feast.

The day of the house-raising arrived. Pigs snorted in their pens, chisels pounded away in the courtyard, a rooster throatily asserted himself, and the soft, excited rise and fall of Naxi-hua (Naxi speech) filled the air.

Mr. Mo hurried into our room with strings of firecrackers, stacks of red banners, and a huge tray of cigarettes, “for celebration!”

The next several hours revealed what must be a lost art in most of the “developed” world – the construction of a house frame with not a single nail; every piece of wood cut perfectly to slot into the next. The men – there were 15 or 20 of them – heaved and hoed and grunted and groaned and cursed the heavy, awkward beams from the ground to a standing position, assisted only by wooden props and ropes made out of vines.

The women trouped back and forth with stacks of mud bricks for the foundation. Slowly, each piece of the framework was raised and secured, and by midday the hard work was done. The firecrackers sounded, the red banners were plastered on the erected beams, and cigarettes were smoked all around.

The party shifted to Mr. Mo’s sister’s house down the road, where a feast had been prepared, using every conceivable part of the pig. Men, women, and children crammed into the modest, sunny courtyard – smoking, eating, drinking, belching, playing cards, gossiping, laughing, eating more pig. All the while, I tried not to think of that spanking clean outhouse down the hill. 6

Independent journalist Samantha Tisdel Wright writes stories with altitude from the heart of the San Juan Mountains in Silverton, CO. Read more of her work at samanthatisdelwright.pressfolios.com.