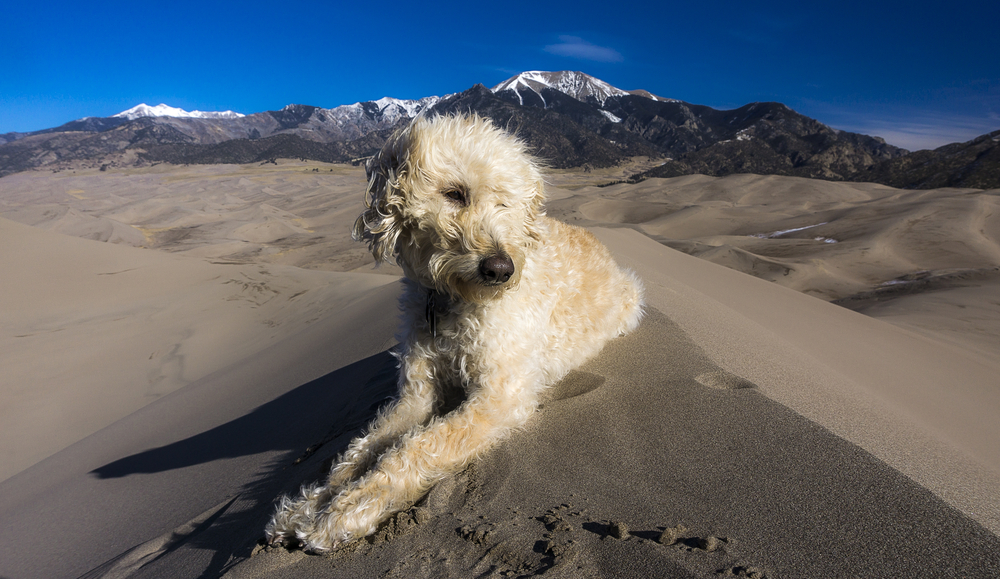 Not the writer's dog. But we hope it captures the essence of his story.

Finally, we were in sight of Great Sand Dunes National Park. I was about to find out how a dog responds to one of the natural wonders of the world, if only we could first survive the aliens and the wind.

Ever since Wally got his diagnosis for a rare form of lymphoma at the age of five, we set out to do all the things that we ever wanted to do together. Someday things, things that — with a one-year median survival rate after chemotherapy — suddenly became right now things.

Now, at a nearby campsite, we stared across the San Luis Valley at the mountain’s striptease, that fleshy flash of smooth sand at its feet. Close enough to crunch its sailing grit in our teeth.

The wind had already staked its claim. So Wally and I staked ours in the center console of the pickup truck. A crowded table for two. No chance to keep a fire or cookstove lit with the breeze starching stiff the various American flags at the park. So the dog ate cold hot dogs and I noshed PB&J and half a bag of chips, with a whole bunch of aliens waving at us.

As if the sand dunes weren’t surreal enough on their own, we were spending the night at the UFO watchtower. A metal viewing platform stretched above and around the little half-sphere visitor’s center. An igloo in the desert. A tinkertown garden sprouted in the platform’s shadow, bearing trinkets that guests have left for the aliens. Reportedly, hundreds of UFOs have been sighted here since the turn of the century. And around the watchtower, cutout metal aliens point the way to campsites and exits.

The wind ultimately petered out enough for us to sleep in a tent. But Wally stayed anxious. Perhaps the wind had agitated him. Perhaps the tingle of the morning’s adventure had him charged with static. Perhaps he picked up on the intergalactic saucer submerged in the sand beneath us.

But we passed the night without event — as far as I’m aware, anyway. Sometimes, the aliens don’t want you to remember.

We rolled into the park about dawn, before the sun warmed the sand and before the rangers charged admission. We weren’t the first visitors on the dunes that morning, but the wind, that attentive butler of the wilds, had freshened up the slopes for us. We crossed the late-running Medano Creek, all of two inches deep in the sand, and we trod up a well-groomed ascent.

I was hyperaware, as we humans can be at the most significant moments of our lives. I had storyboarded an idea of this adventure for months. But I failed to anticipate the ground cascading away from each footfall. The warming air. The distant shouts of racing kids. The way trees marched down this vertebrae of the Rocky Mountains right to where the earth turned to sand. And my dog, trudging along the ridges with me, wholly and absolutely unengaged with our environs.

I didn’t get it. His neurons ought to be firing like Yosemite Sam in the newness of this foreign terrain. But he seemed, in a word, bored.

Yet we were here. We were at the sand dunes. Finally. Together. And together, we were going to scale the first ridge before the sand turned into an EZ Bake Oven.

It is a testament to our bond, a bond created by love and affection, that Wally summited the dune with me. I can’t say that I cried at the top, because then you’d think I was a softie. But I did squeeze my furry bud, and take the requisite selfies, and perch atop the delicately-sharp ridge of sand at this peak of adventure.

Then we descended our monumental achievement in all of twelve minutes. Wally bounded down entire swells in single leaps that he learned from the jackrabbits. He took a cursory lick from the creek at the base of the dunes. I peeled off my socks to splash and play with him — and instead of splashing or playing, he insisted on making the far shore.

Here’s where he sated his thirst. He gulped down odors and scents like a dog let out of the kennel for the first time in his life. That’s when it clicked for me — sand dunes, if they even have a smell, certainly have no variety of smells. This adventure, the acme of my boy-and-dog desire, had dragged Wally into a wasteland.

He guzzled down airborne particles from shrubs and footprints and an exotic buffet of rocks. I’ve seen Wally appear happier, but seldom more relieved. My myopic drive to visit the sand dunes simply because the park allows dogs drove me to mush my dog uphill into a sensory deprivation chamber. With a hell of a view, mind you. But nothing at all to interest an intrepid dog.

By the time Wally tuckered out his sniffer, it was all of noon with a three hour drive home. Our grand adventure had lost its air pressure. We still had some fun, but this was no excursion for the ages. My emergency contacts knew not to expect my back-in-civilization call until the next day. We could just go home and not tell anybody. Or… we could meander home like a couple of tramps.

An item on my own someday list was to take one of those road trips where you stop at all the points of interest, and check out any restaurant offering the “World’s Best Burger” and generally spend enough time in places to say you’ve actually been there. There’s not much between Great Sand Dunes and Durango that people go out of their way to see. Which was perfect — that’s just what we wanted to see. And sniff.

We kicked up dust veering into Elephant Rocks to munch a picnic lunch, our first meal outside the truck all trip long. We walked nearly the whole length of the town of Del Norte, there and back again, in search of a cup of coffee. This, it seemed, did not exist in Del Norte after three o’clock on a Saturday afternoon. Then we found it — after giving up and driving out of town. Out on the edge (as much as a small town has edges), there was the Mystic Biscuit and its Golden Lotus. I’m a cup-of-drip kind of guy — but this, this was a turmeric-and-cinnamon-in-frothed-milk kind of day. And this Golden Lotus was a more spiritual and out-of-this-world experience than the aliens deigned to offer me. As far as I’m aware, anyway.

We trekked up the road to the Wolf Creek scenic overlook, where I inhaled expanses of spruce-beetle devastation and Wally chased a chipmunk under a rock. We paused in Pagosa to cruise the river trail, and one of us got to sniff a bunch of new acquaintances. We stopped for some chicken wings at a dog-friendly brewpub patio, where Wally decided this was a sit-on-the-table kind of day, and the waitress decided he deserved it.

Durango, our home, welcomed our straggly selves well after dark. We clocked ten hours on that three-hour trip, and the dunes seemed like a week behind us. We sure didn’t have the adventure we set out for — yet this dog convinced me to have one far more sensory and unexpected than I could ever have planned. 6

Zach Hively writes Fool’s Gold: The Column and other creative nonfiction. You can find him online at zachhively.com.